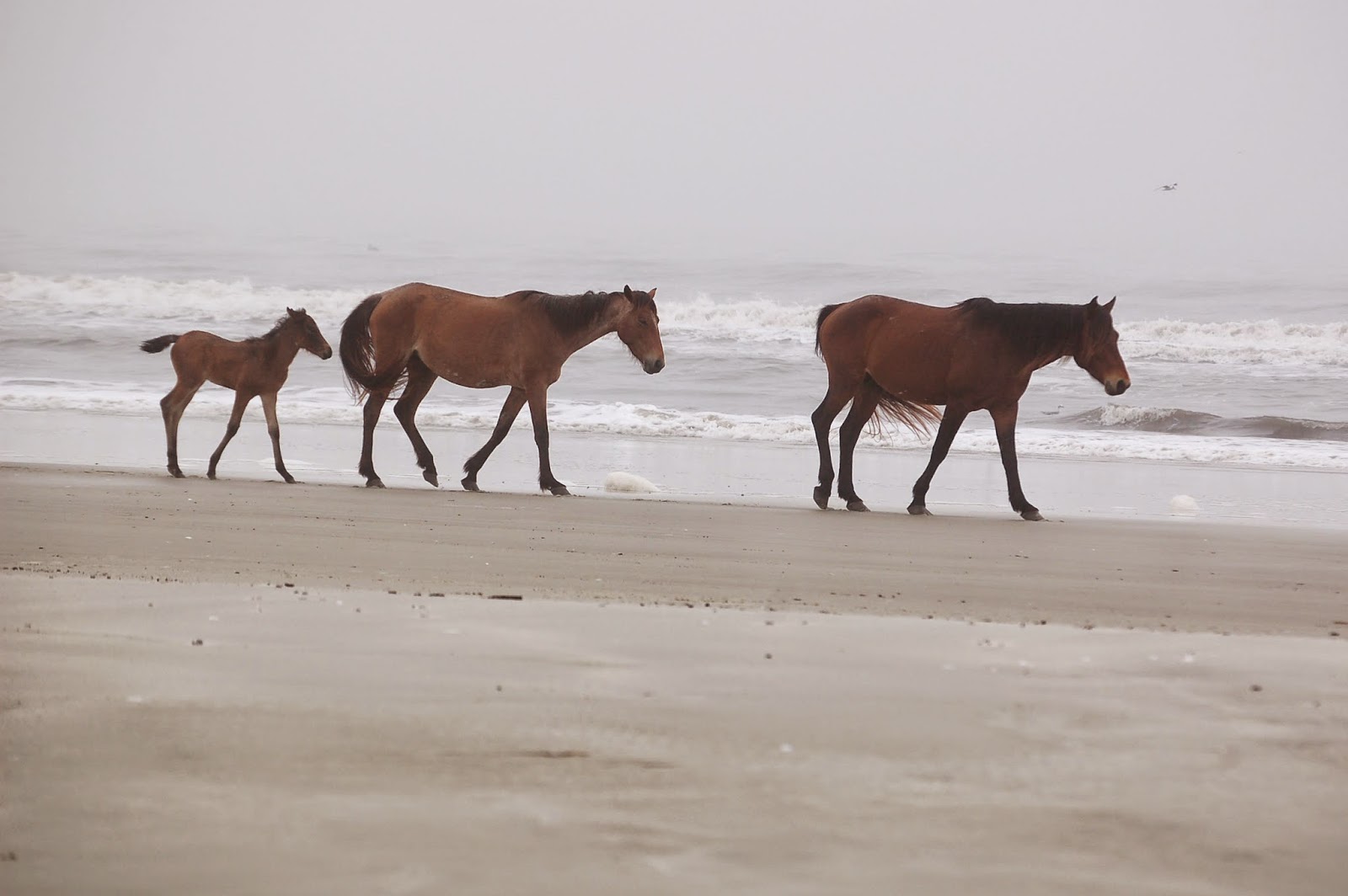 We sat in the sand at the top of the beach, staring out toward the sea, where crests of breaking waves formed white horizontal bands blending into the fog above. Behind us, dunes heaped inland, while to the north and south, the beach stretched for a hundred yards or so before disappearing into the fog. We each had our books, but sometimes just looked up and stared, not expecting anything really, but savoring the isolation. 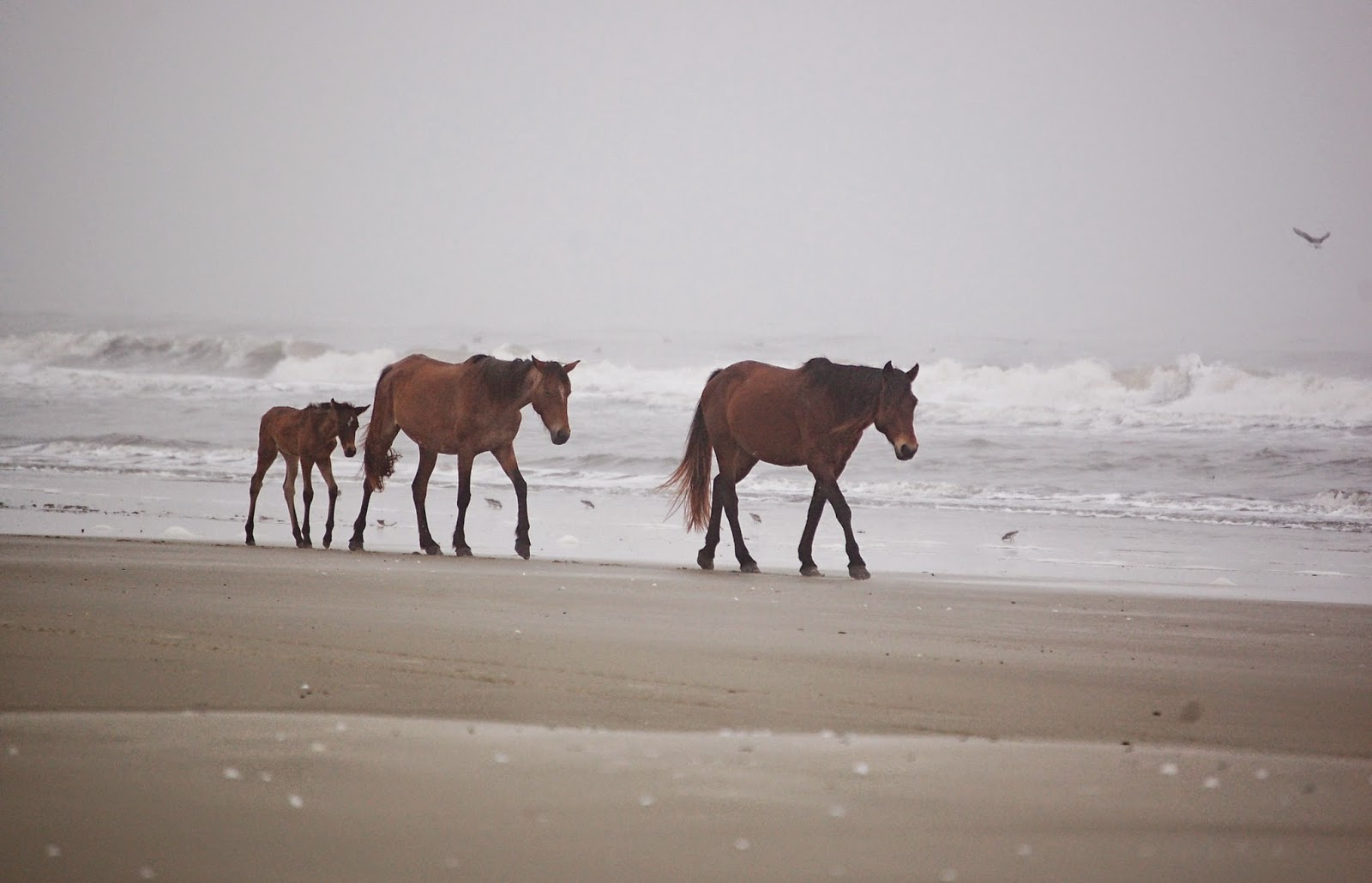 We’d watched a group hike past, carrying backpacks, and a few beachcombers following the wrack line, heads bowed, but it felt like we were on our own island of sand and that just about anything might emerge from the fog. And then a dark shape appeared down at the water’s edge, finally morphing into three horses. As they neared, we could see that one was smaller: a foal on tall, spindly legs, accompanied by a pair of larger horses. They paused near us, gazing for what seemed a long moment, and continued walking down the beach. 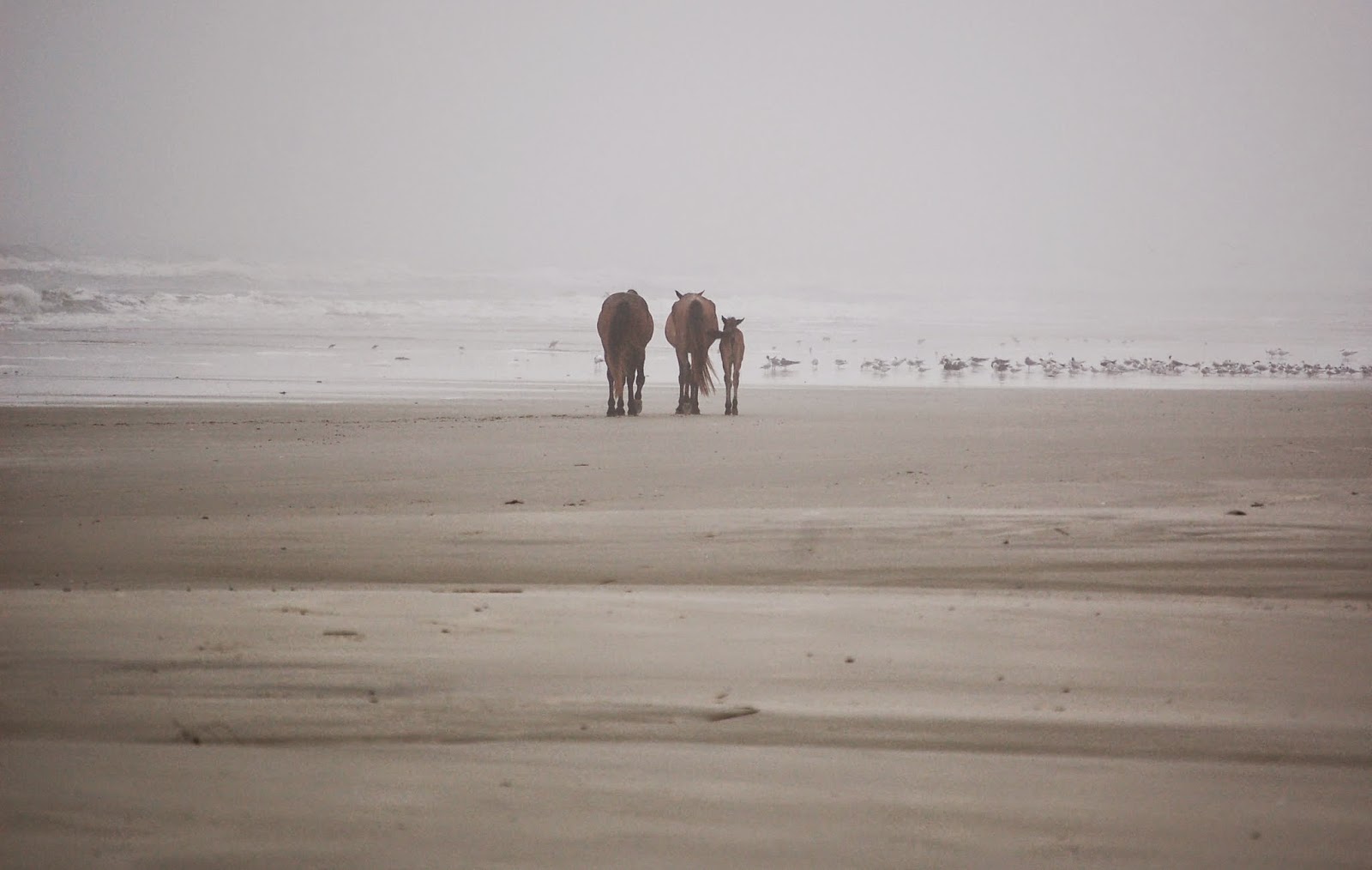 We were at Sea Camp Beach on Cumberland Island, near the campground where we’d camped the previous night. As the crow flies, we were only about five miles from our home in St Marys, but it took a lot to get here. 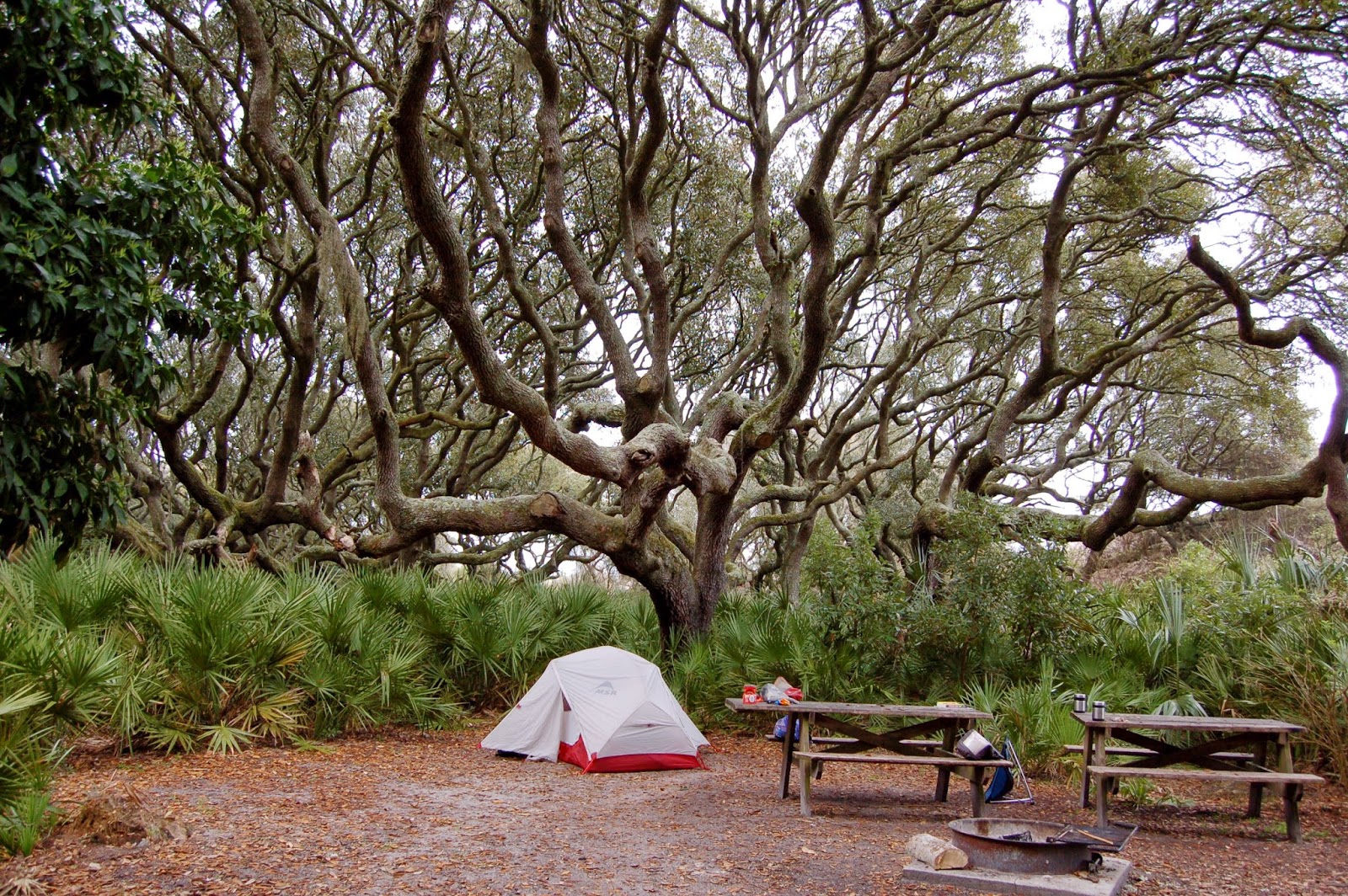 We were fortunate to have a campground reservation, and managed to get away from work for a couple of days- which seemed in doubt when a large group expressed interest in a trip and then finally changed their mind. 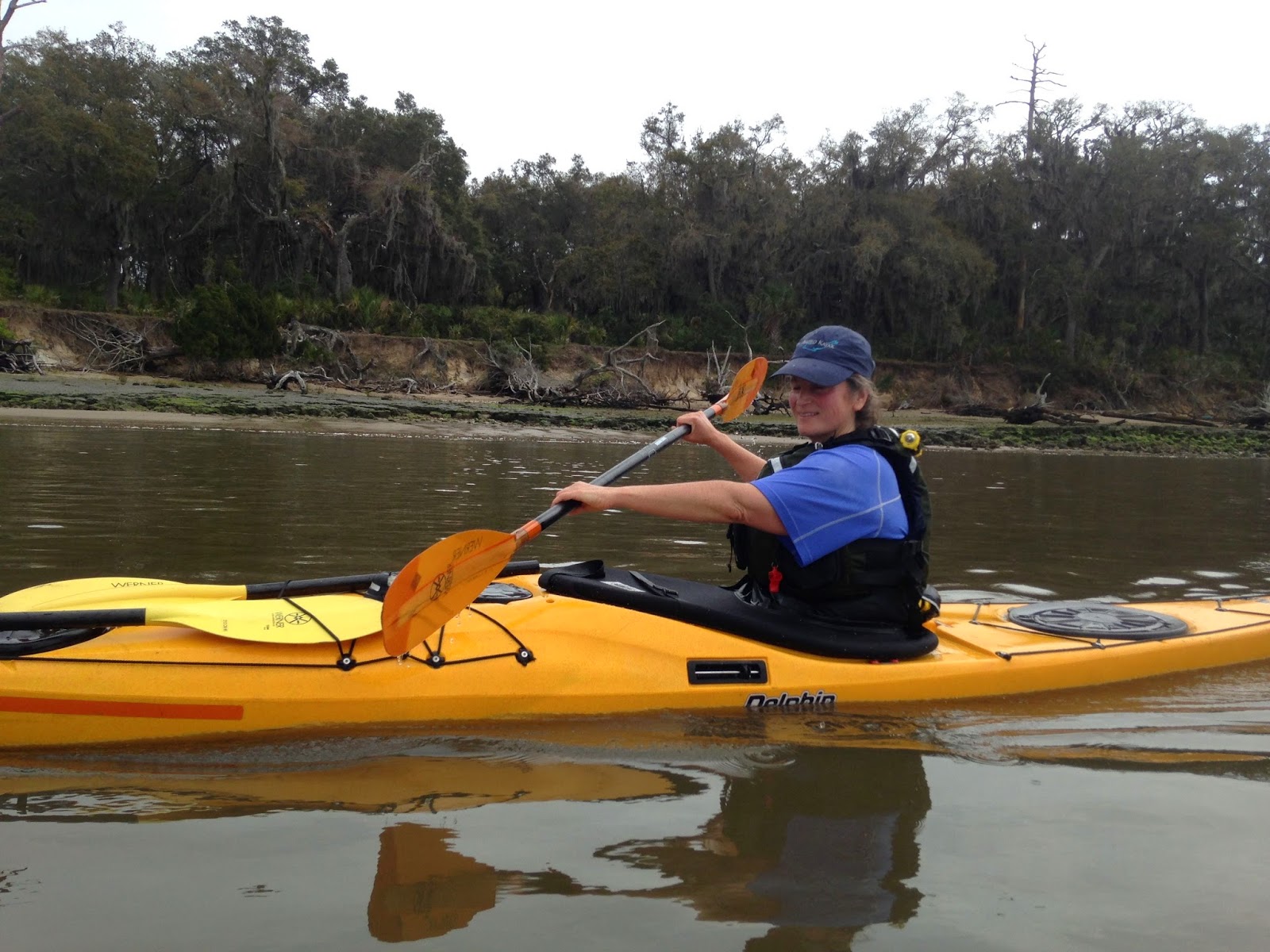 We’d launched in St Marys and caught the outgoing current for the first three miles, arriving at Sea Camp dock in a little over two hours. We unpacked our boats and stashed them behind the ranger station before carting our gear the half-mile to our site. 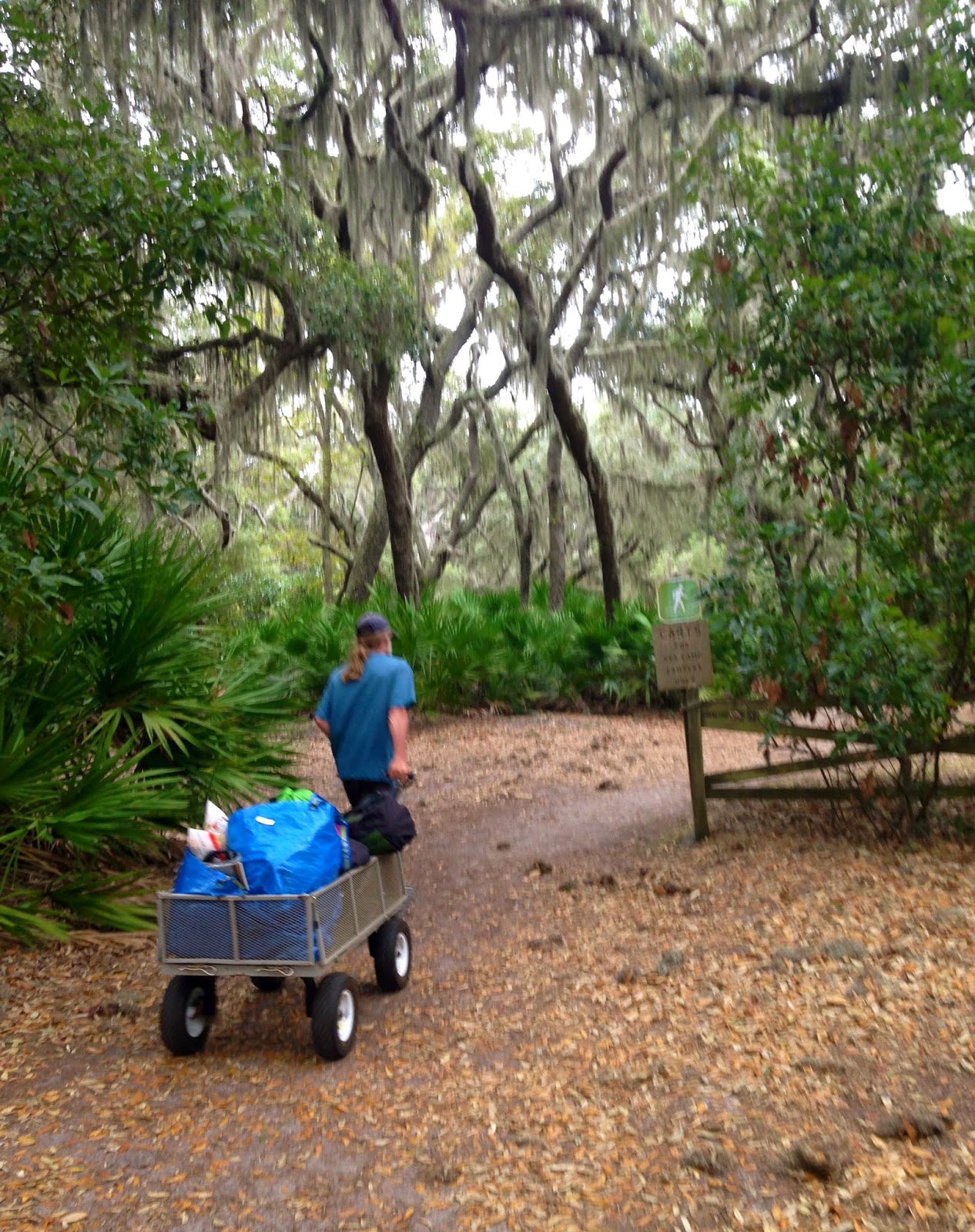 The campsites at Sea Camp are cleared from an understory of palmettoes beneath a canopy of massive live oak branches, twisting circuitous routes toward the sunlight. Ours was backed against the dunes, beyond which rose the constant white roar of the sea- probably another quarter-mile distant. 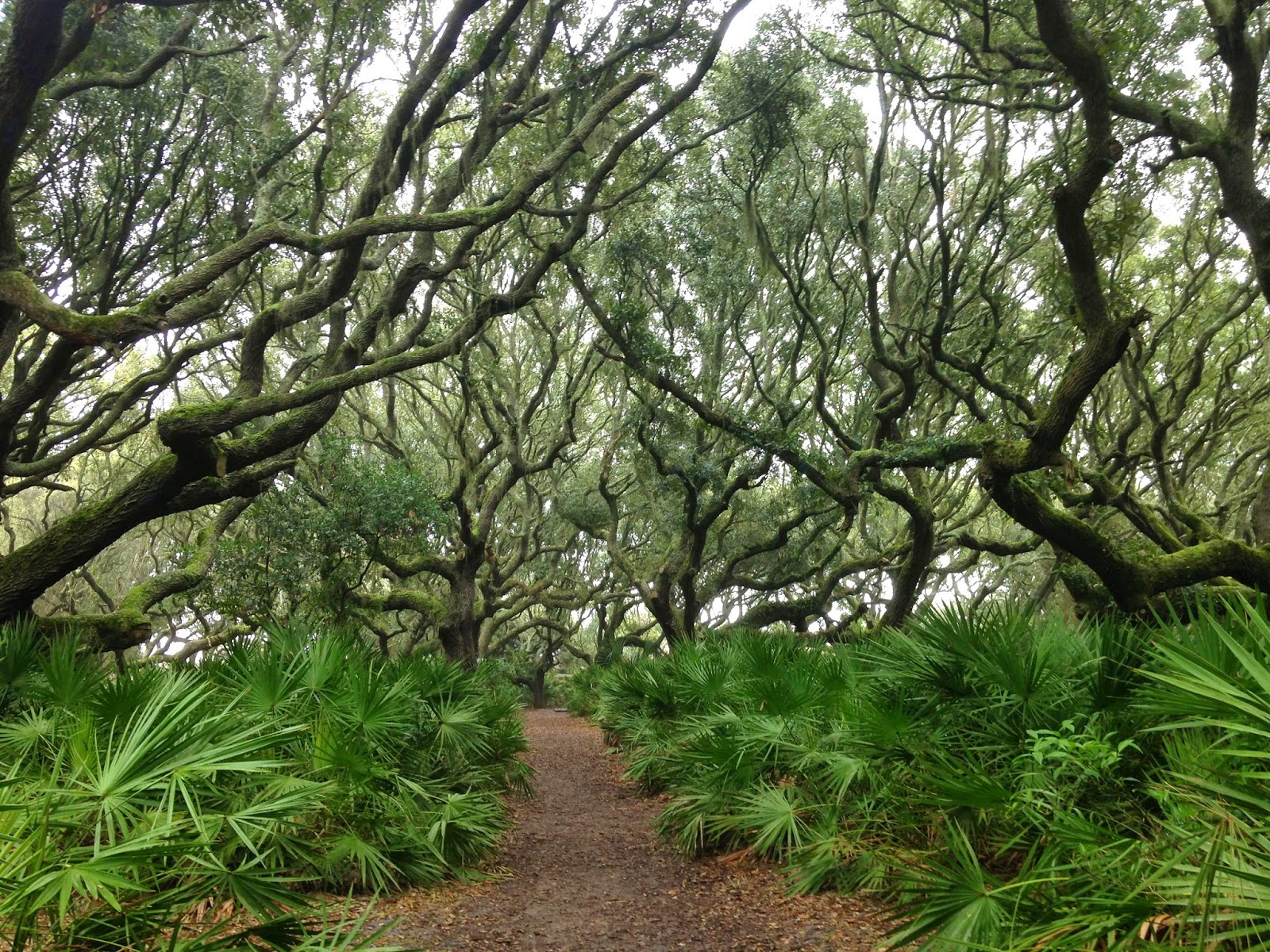 With a limit of 60 campers there at any time, and frequent groups, some campsites remain empty, and the dense palmettoes separate the sites enough that you’re in your own world. The feeling is quiet, subdued like the light that filters down through the canopy. 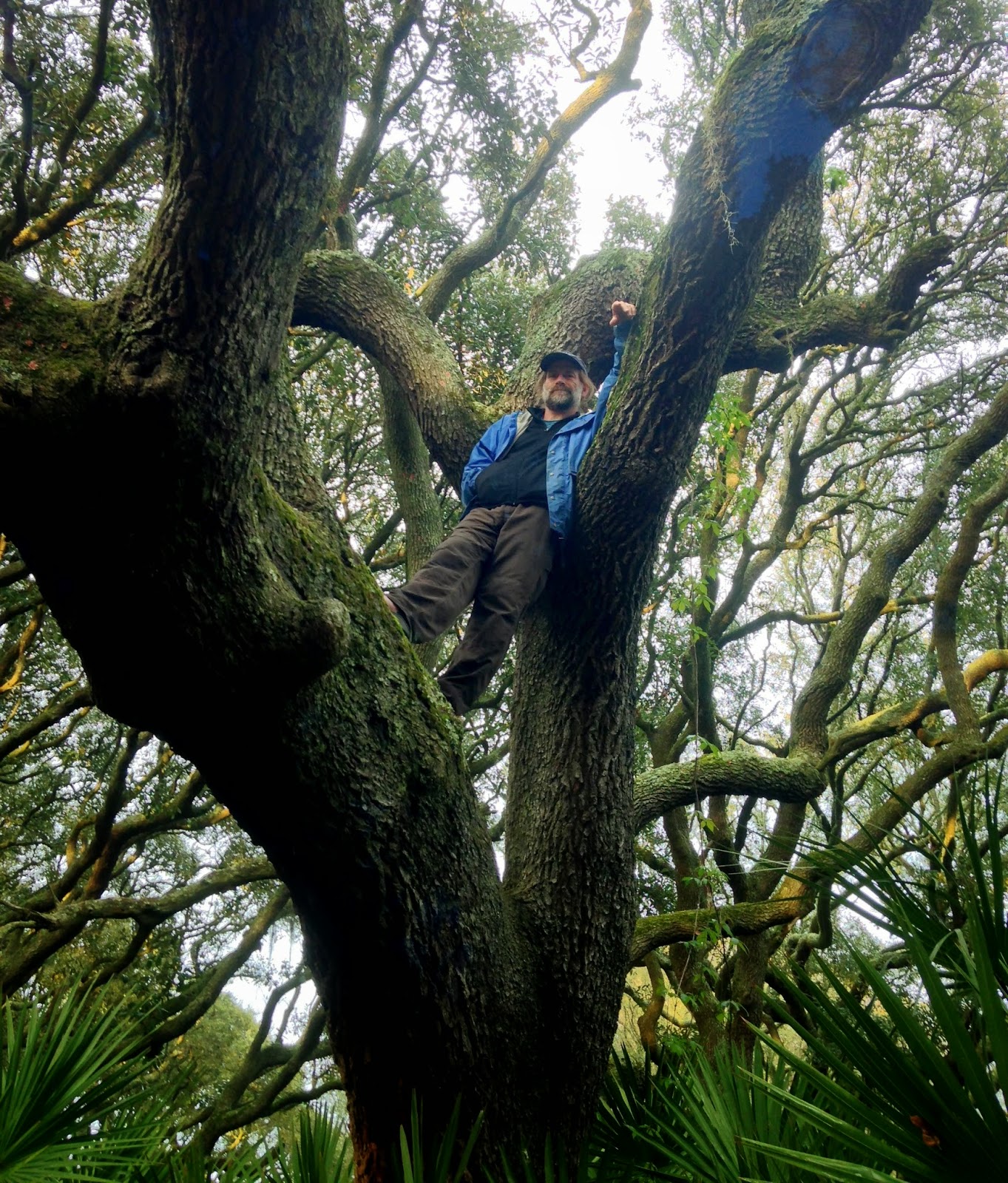 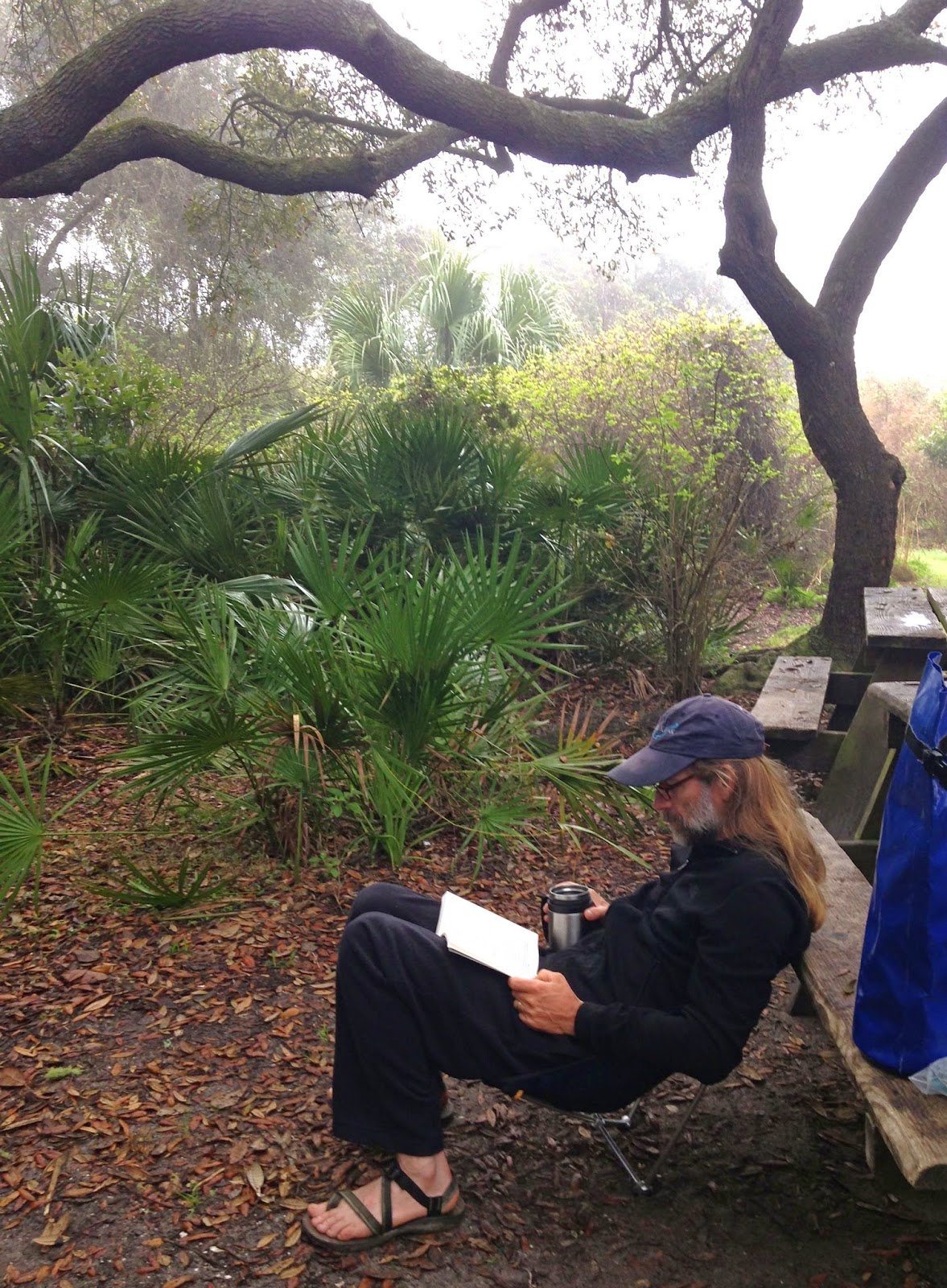 You get some picnic tables, a food storage cage atop a raccoon-resistant post, and not far away are bathrooms with cold showers, electricity and a compost bin. It isn’t easy kayak camping, with the long haul from the water, but once there, the campsite feels like a deluxe suite. 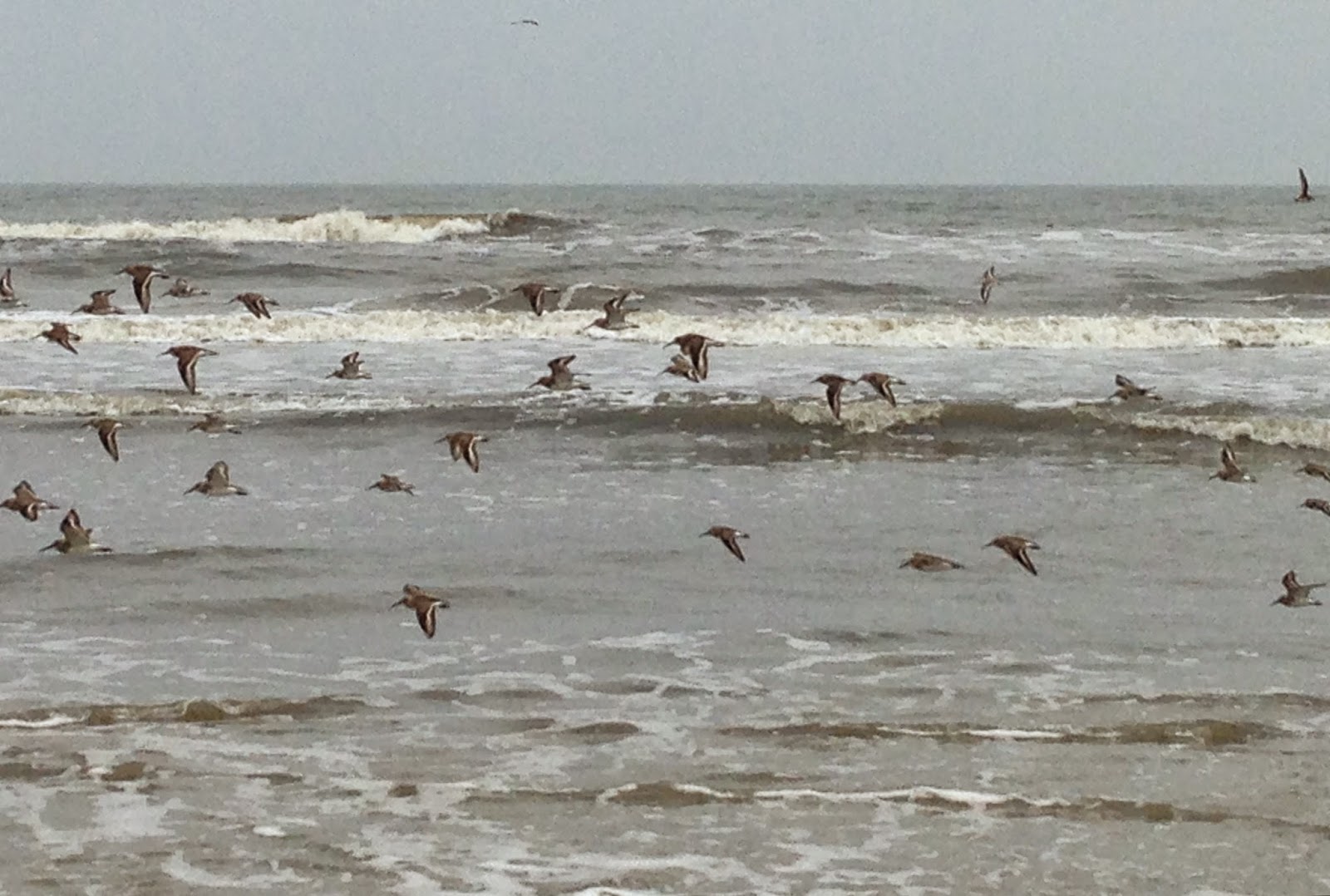 If it weren’t for the tide, I probably would have opted to head back earlier, taking the questionable stress-abatement approach of trying to get to more work done. Instead, we were on the tide’s schedule and it made more sense to spend a few hours sitting on the beach in the fog. 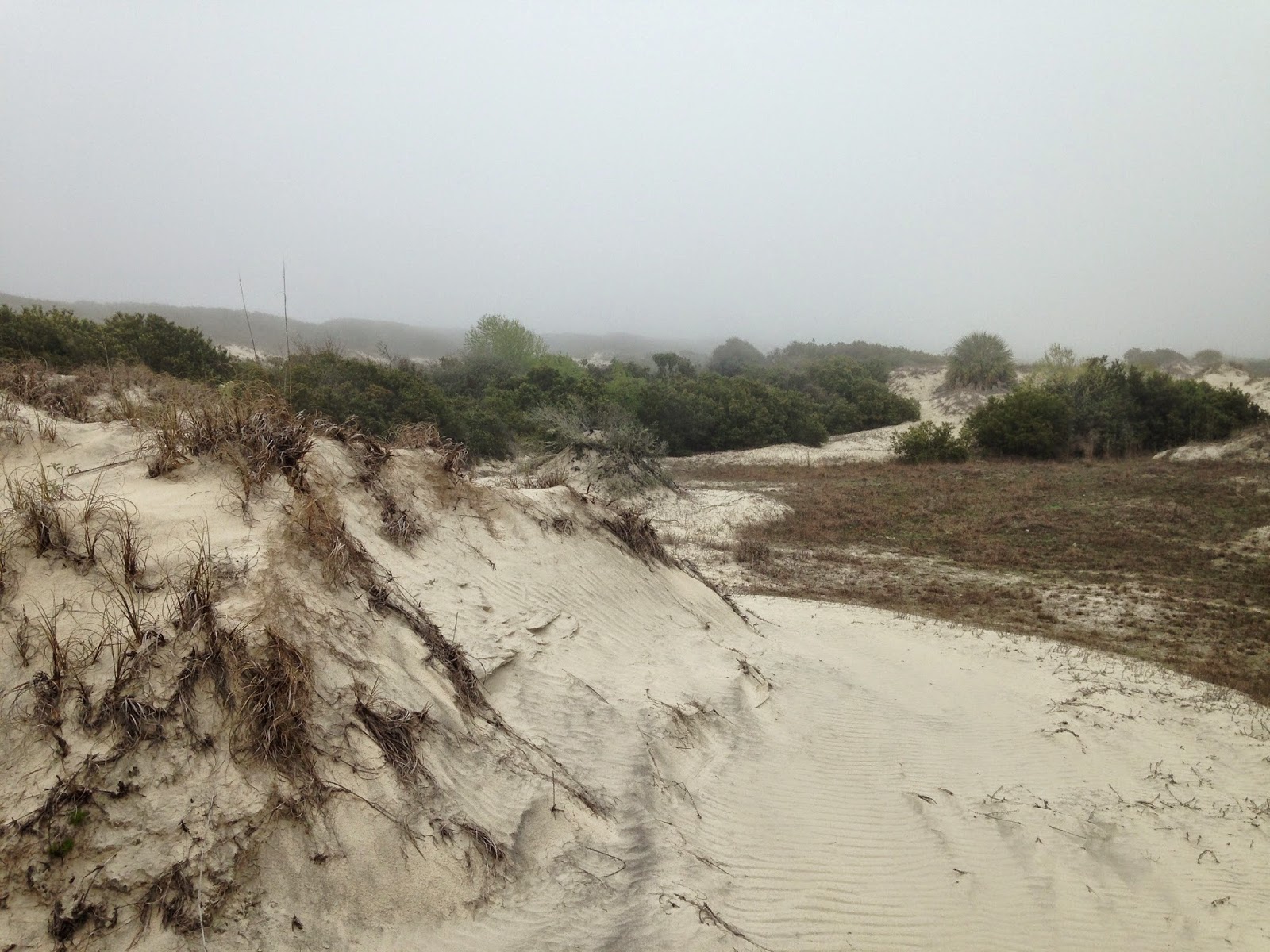 After the horses disappeared, we kept watching, as though waiting for the next surprise, but nothing came. Finally, we picked-up the shells we’d found, packed-up our books and snacks, and walked back across the island to our kayaks.

thanks to Rebecca Daugherty for most of these photos

Posted by Michael Daugherty at 5:48 PM

Much different than New England.

So beautiful. Seeing wild horses would be a dream come true for me. I was thinking this trip would be wonderful inspiration for some of your paintings for your art gallery, then I just learned your gallery is no longer in Stonington. I'm lucky I was able to visit it in 2011. Cheers from Canada. We are still skiing up here.