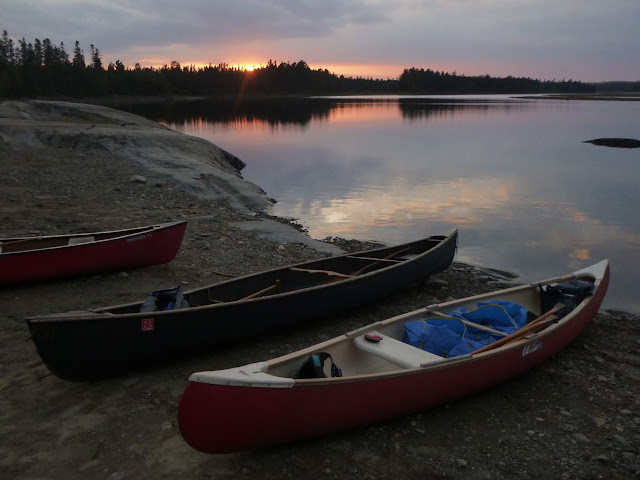 Because we were cooking chili on the last night, there were the inevitable fart jokes and comments – the lure of sleeping without flies over our tents to allow better air circulation, the hope that the beans would run their course by the next day when we would all pile into the truck at the take-out. One might expect that laughing at flatulence would be the sort of thing we outgrow, but we – all six of us – ranged in age from late forties to early sixties, and we had not outgrown fart jokes. 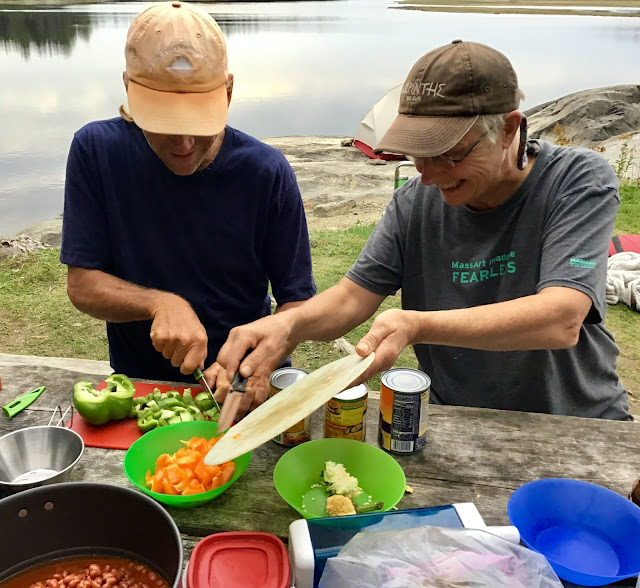 But then again, it was day three, and we’d been having fun, like kids, laughing easily at just about anything. We were at the Pine Stream campsite, on the West Branch of the Penobscot River in Maine’s North Woods, our canoes pulled-up on shore below us. 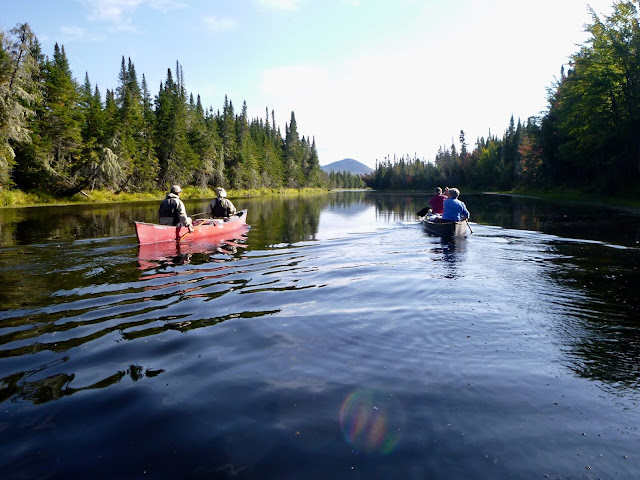 The trip had begun some 14 or 15 miles upstream where, instead of just paddling down the river, we’d spent our first night going up Lobster Stream to Lobster Lake. That first day we’d launched later than hoped. Rebecca and I had started the morning in Stonington where we’d been cat-sitting for a couple of weeks – a bit of luxury to have a bathroom and kitchen and a comfy couch with internet – a nice break from our trailer out in the woods. We left in the dark, as fishermen were arriving in town. We’d been up late, cleaning the apartment in anticipation of the owners’ return, our cars each stuffed with miscellaneous belongings and bins of kayak gear, and we were feeling weary of the unrooted nature of our lifestyle. We drove our separate cars over to Deer Isle, where the day before we’d loaded the canoes onto the trailer at our friends’ house. We finished loading gear and food, hoping we’d got everything, and set-off, six of us in the crew cab of Linda’s truck. We were hoping to meet our shuttle at 9 am, well over three hours away.

Those plans dissolved quickly when, north of Blue Hill, a wheel came off the trailer. Linda saw it happen and stopped quickly enough to avoid destroying the hub, and amazingly, we found the wheel and tire intact, along with 4 out of the 5 lug nuts, in the roadside weeds. A man waiting with a child for a bus helped us get it put back together. At the time it felt like maybe the trip was doomed, like it was a sign. We’d all struggled with the decision of whether we would go or not. It seemed there was so much else going-on, and it would have just been easier to stay home. But we all told ourselves that these were mental obstacles, that once we got our butts into the canoes, we would be very glad we came. Now we weren’t so sure. At nine am, instead of meeting our shuttle, we sat in the waiting room at a tire store in Brewer, flipping through magazines. The truck and trailer could be shuttled later though, and now we were not beholden to a schedule. 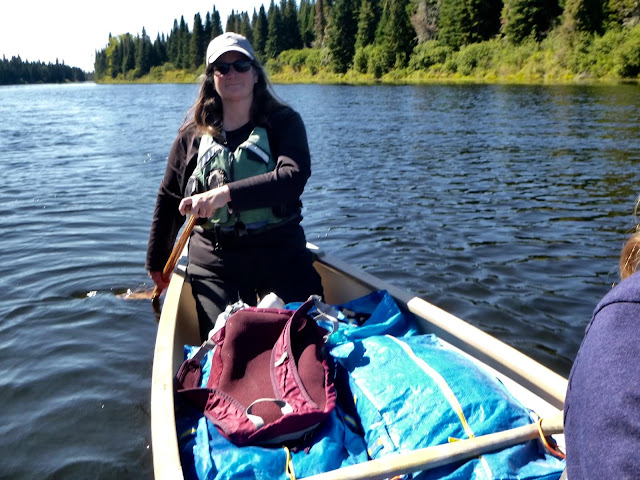 By then it seemed prudent to persevere; what else could go wrong? We launched mid-afternoon and paddled a few miles to our campsite at Lobster Lake. Along the way we had glimpses of Katahdin and other nearby mountains, but I was struck that the area was mostly flat, mostly wet, criss-crossed by waterways. Our canoes were piled with gear in the middle, some with coolers and folding chairs. In the back of my mind, I observed how this differed from doing the same thing in a sea kayak, but also compared it to a composite L.L. Bean catalog cover, and wondered if maybe I should be wearing plaid, or a more backwoodsy sort of hat. We camped at Shallow Bay campsite, above a sandy beach. Not far away, an L.L. Bean guided trip had camped on another beach, and as it grew dark, the glow of their campfire was the only other light we could see. 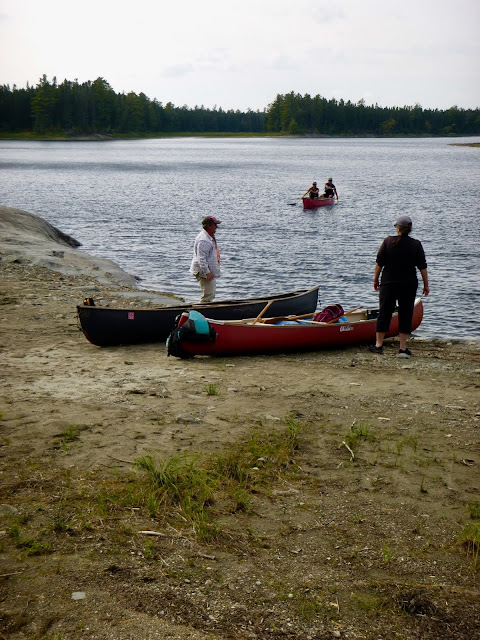 On Saturday morning we paddled back up Lobster Stream, past the put-in, overflowing with trucks, and entered the West Branch of the Penobscot, where we suddenly had a little current helping us downstream. I started off paddling in the bow and it felt good to work on my canoe stroke, to get into a torso-turning rhythm, to know when to throw-in a little draw stroke to pull us around an obstacle. Our friends, unknown to each other before the trip, chatted behind us. I wondered when we might see a moose. We stopped to check-out campsites, but never felt like we’d gone quite far enough. Then when it did feel we’d gone far enough the campsites were full: big tents, fishermen, canoes with outboard motors. Around Big Island, the sites were all close enough to each other that you’d never feel quite alone. We stopped at a vacant site, ate a late lunch, and kept going until late in the day, when we were almost to the next lake, not far from where we would take-out. By then, the vacant site near Pine Stream felt a bit miraculous: a big hump of smooth rock rising from the river. Before the canoes were even unloaded we jumped off the rock, into the river, and swam. Fresh water: that’s another difference between sea kayaking and canoeing. 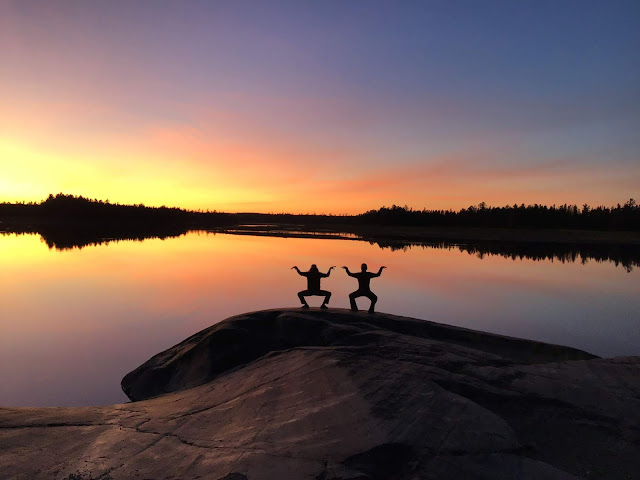 While we ate dinner we easily decided to spend another night at this site. We liked the smooth rock and the broad view of a bend in the river with shallow, marshy banks. It seemed inevitable we would see moose here. At the first campsite there’d been tracks in the morning – a moose strolling right up to the tents – but we’d seen none along the river. There were plentiful tracks in the mud here as well. We decided we’d spend Sunday enjoying this place and taking a side trip up Pine Stream. 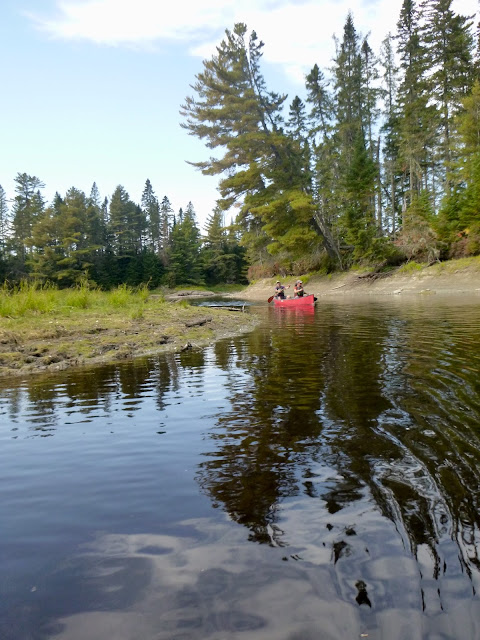 On the map, Pine Stream winds several miles south, originating in several remote ponds. The water was only high enough to paddle a mile or two upstream though, so we got out and walked a little and then headed back, stopping for lunch along the way. We had a little down-time that afternoon, something we all needed. I lay in my hammock and read for a while. 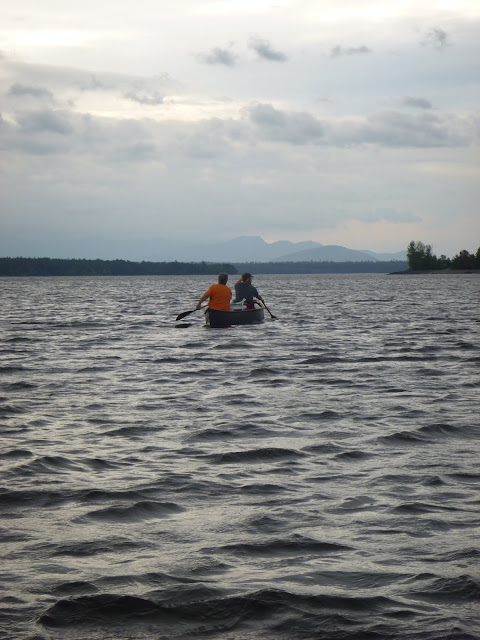 The weather changed overnight, clouds moving-in from the west, the wind increasing, and in the morning we paddled the last couple of miles out the river to Chesuncook Lake with the wind behind us. Katahdin rose above the lake in the distance. We took-out at Graveyard Point and found the truck and trailer parked there. The rain began while we loaded-up. 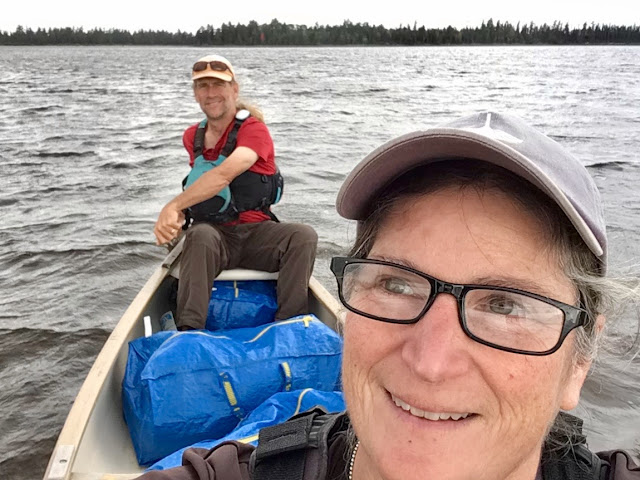 Notes:
Moose seen: 0 (maybe they were anticipating the start of hunting season on Monday).

There were a few other fees as well, a day-use fee and a nightly camping fee – all well worth it, but another notable difference between camping here and along the islands of the Maine coast, where it is generally free. So, groceries and gas aside, three nights of camping with a shuttle came to a couple-hundred dollars per couple.

Among our friends on this trip were Shari and Hutch, whose adventures living in a tiny trailer can be read about at their Freedom In A Can website.

Posted by Michael Daugherty at 2:37 PM