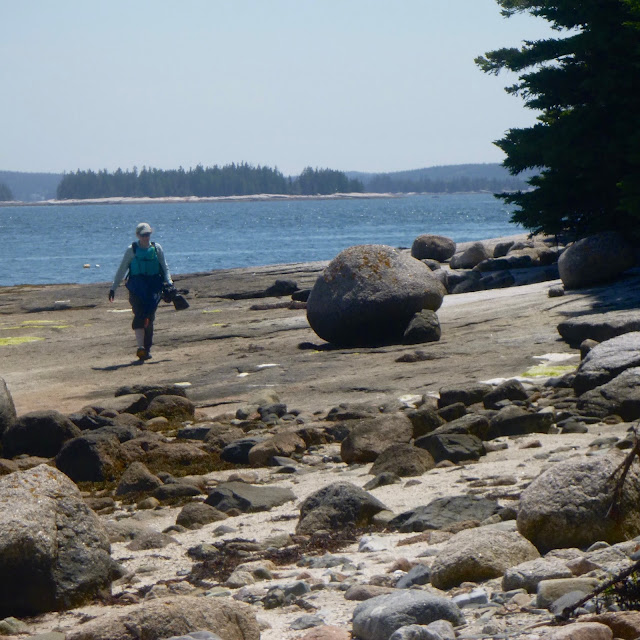 Although we’ve organized many annual island clean-ups over the years, usually to Wreck and Round Islands, this year it was not on our radar until the Maine Island Trail Association contacted us about their plans, which were a bit different this year. Because of the need for social distancing, it is problematic to put a bunch of diverse people together in a small boat, so MITA has asked people to volunteer for less organized efforts with fewer people. Of course, we could pick-up all kinds of trash out there, but can’t really get most of it back in our kayaks. 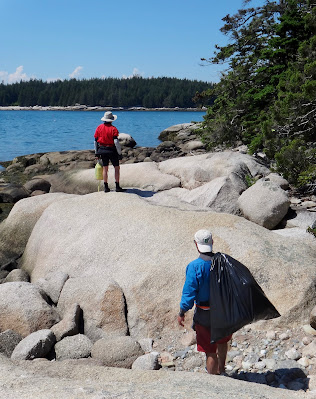 MITA organized a concentrated effort off Stonington though, with the MITA skiffs picking-up garbage, so I sent out an email or two. Also, staff from Island Heritage Trust wanted to take part, so we took-on our usual Wreck and Round Islands, which are both owned by IHT and are on the Maine Island Trail for day use. 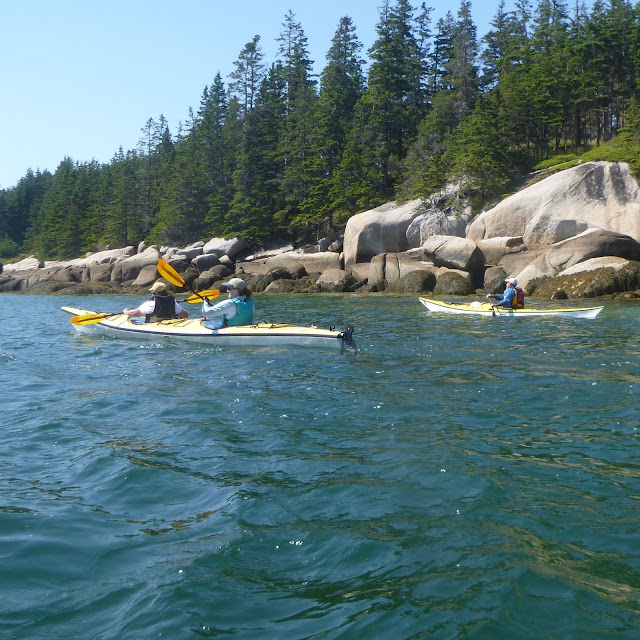 We ended-up with a nice group of people: 9 in kayaks and another 2 in a skiff. Some local, some from afar (one from out of state who had done his quarantine time). Social distancing was not difficult, and I think everyone was happy to be part of a group with a common goal. Rebecca and I are pretty familiar with Wreck Island and where the garbage usually accumulates, and I think our methods have become more efficient over the years. We split-up and went opposite directions, finally meeting at a beach on the south side for lunch, joined by the two MITA skiffs and the skiff from our group.  And yes, we all kept our distance from each other. Note: in the next photo, the people sitting close to each other are in the same family. 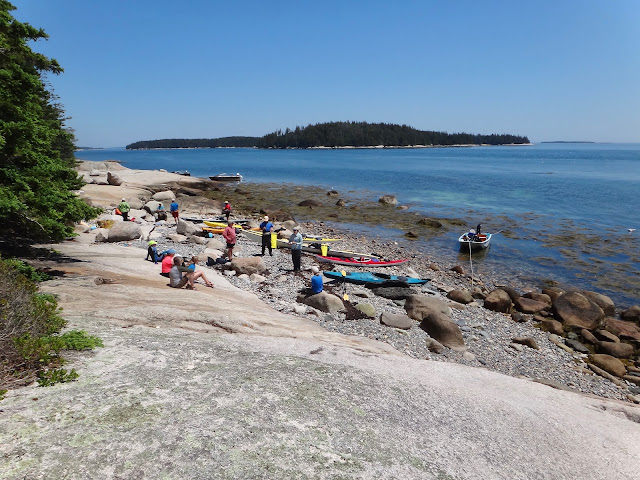 The forecast had been for some fog, so I was relieved that we had a clear day, even a bit hot (90s inland). The day was really just perfect in many ways- the weather, the paddling, the people. After lunch we went-on to Round Island and found part of it clean, obviously recently picked-up by an anonymous volunteer (thanks, whoever you are). The other side had the usual accumulation of fishing-related garbage.  We meandered back to town, stopping at Little Camp Island for the slightly elevated glimpse of the nearby islands from the bare top of the island, where wildflowers are starting to bloom. 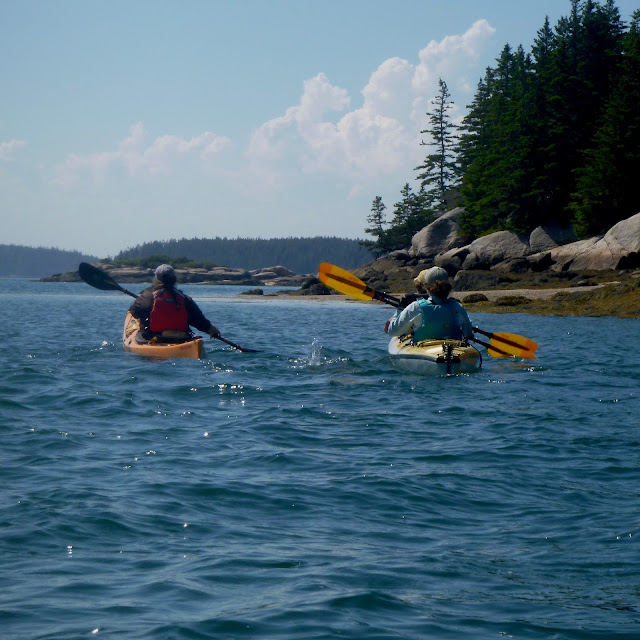 I hesitate to include the weird encounter we had there, which cast a little shadow over an otherwise perfect day, but it’s probably worth mentioning. As we approached the landing beach on Little Camp we saw a portable latrine tent set-up atop the beach. I don’t think I’ve ever seen that before, certainly not on a no-camping island, and I suppose it might have signaled an unusual encounter to follow (or it could signal someone really concerned about Leave No Trace visitation). There was a familiar local skiff anchored, and after we landed we noticed a beach blanket and assorted other stuff, but saw no people. 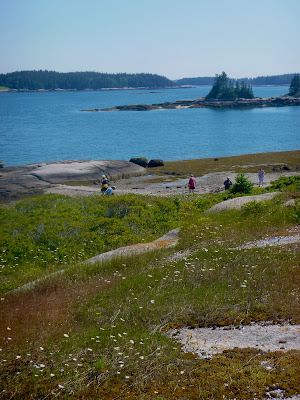 We encountered the couple and their dog as we walked toward the height of the island. Just to summarize- and I missed most of the exchange, being hard-of-hearing and having walked ahead- but he complained that they’d come out there to get away from people and that there was a virus going on, etcetera. He was reminded it was a public island, which only drew a lot of angry swearing. We could have elaborated that not only was it a public island, but a very popular one, close to town, and not a place one should ever expect to have all to oneself. And of course we were only visiting for a few minutes near the end of the day. Fortunately it ended there. I watched over our boats as they packed up and left. It’s not worth dwelling on it, but it was perhaps a reminder of the strange time we’re experiencing. I’ve had very few negative experiences with people out there, and the current state of things seems to increase tensions, and perhaps also enhance local residents’ sense of territoriality and animosity towards people who might be from somewhere else (even though many local locals are of the ‘no mask’ ilk). Maybe it’s good to take it as a reminder to not make assumptions and to try to be nice.

We returned to the launch, having left two islands in a much cleaner state, part of a bigger effort that improved a bunch of islands out there, and that felt pretty good. I would encourage anyone to look for these clean-up opportunities and get involved. Here's a link to MITA's 'A Call To Oars' announcement.

1)    More info about this paddling locale may be found in my guidebook AMC’s Best Sea Kayaking in New England.  I get asked quite a lot for basic advice: what boat to buy, am I being safe, etc. There’s a lot of that in my book. Please buy it or check it out from the library. I don’t mind occasional requests for help or advice, but it does get old when people are averse to just reading a book where all these questions are already answered.

2)    While the quarantine order for people coming from out of state is in effect, those coming from New Hampshire and Vermont are now excluded from the requirement, and all others may skip the quarantine if they have a certificate of compliance from a recent negative test. New inquiries and bookings have begun again. Yesterday’s trip gave me hope that we can be safe and socially distanced without it interfering with our on-water safety and fun.

3)    The new book: it’s getting there. I will probably make a Kindle version available before the print edition is out. Proofs of the print edition have taken much longer than expected, and we still have some illustrations to add. Also, Zest Maine will include a link to the Kindle edition in their July/August online issue, which posts on July 15.

4)    One thing we’re offering this summer is a 5-week subscription series: 5 full-day trips with instruction in various locales for only $400 (that’s $80 per day). I’m not very good at selling myself. I meet and communicate with so many people who would benefit and something keeps me from pushing it. You can try out different boats before you buy one. You can learn things and gain some basic understanding of how to be safe, all while going different places on fun trips. And you can meet some other local paddlers.

5)    Old Quarry Ocean Adventures is open again, with, for now, a pared-down selection of offerings. There will be camping and kayaking. You can go there to park and launch. The other day we met Eric, the new manager, and he’s got a great attitude.

Posted by Michael Daugherty at 11:46 AM