As we paddled along Little McGlathery Island, a mild swell washed over the near-shore rocks, lifting our kayaks gently and then dropping them as the waves rebounded from the granite bluffs. Gooseberry Island lay to the south, with Isle au Haut rising behind it. The day had started bright and clear, but now a layer of high, wispy stratus clouds floated over us from the west, the sun a pale disc. Rebecca maneuvered beside me. She said, “Lunch on Gooseberry?” We turned our bows southward. 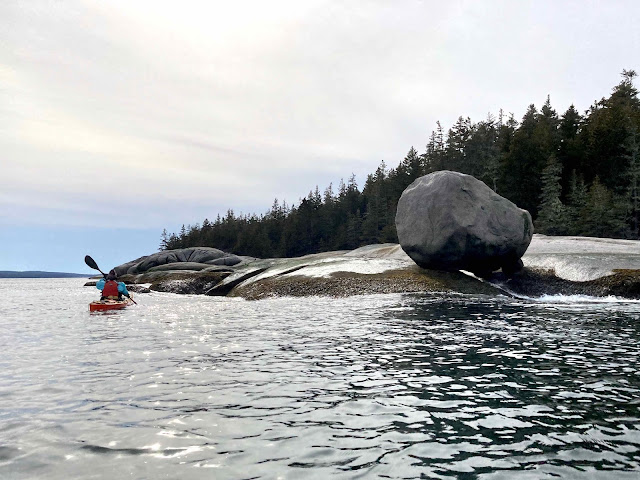 Paddling excursions had lately been the result of watching the weather, and days ahead, deciding that a particular day might be good enough for a paddle. And when that day arrived, if the weather forecast was close enough, and if we weren’t too lazy or too stuck in our routines, we dropped everything and went. Sunday was one of those days. With the temperatures approaching 40 degrees, we made some sandwiches, filled the Thermos with hot mocha and went for a paddle. We had a few ideas about places to go, but once we launched we just pointed across the Thorofare and went with no particular goal, until finally we found ourselves on the seaward side of Little McGlathery, angling out toward Gooseberry Island, a half-mile off. 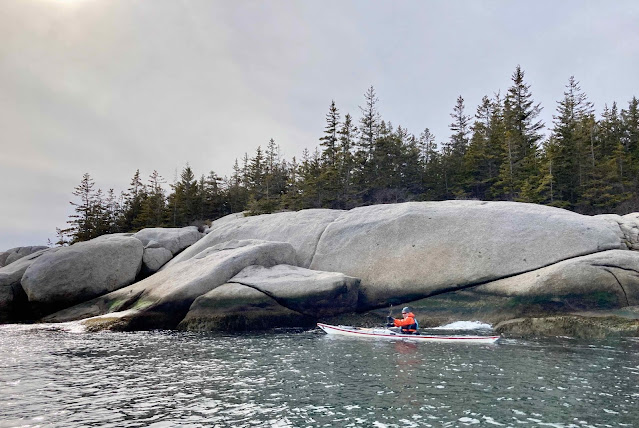 Even on the last day in February, I had a sense of relief as we rounded the point and saw that there was no one else at the beach where we liked to land, at the head of a narrow cove, overlooked by a dense boulder field. Of course, there was no one there, but the habits from summer remain. We hadn’t come across other paddlers since some time in the fall, and in a way I looked forward to seeing others out there again. There weren’t even many lobster boats out, quiet for such a nice day. 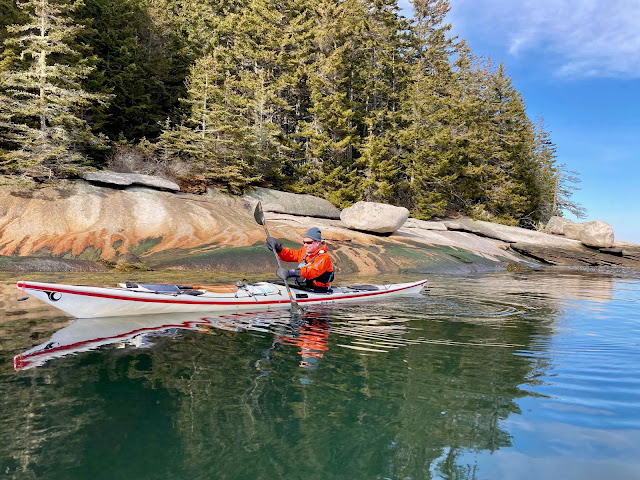 We landed on the shell sand beach, barely pulling our boats up since the tide was retreating, and we sat on a log to eat our sandwiches. The water looked glassy clear, as it does in winter when there’s less algae, but frigid, probably just above freezing. I don’t think we had much to say. We’d had no shortage of time together lately, and we always found things to talk about. But it was also a relief just to sit and eat our sandwiches and look out toward Isle a Haut, with the clouds thickening before the sun. 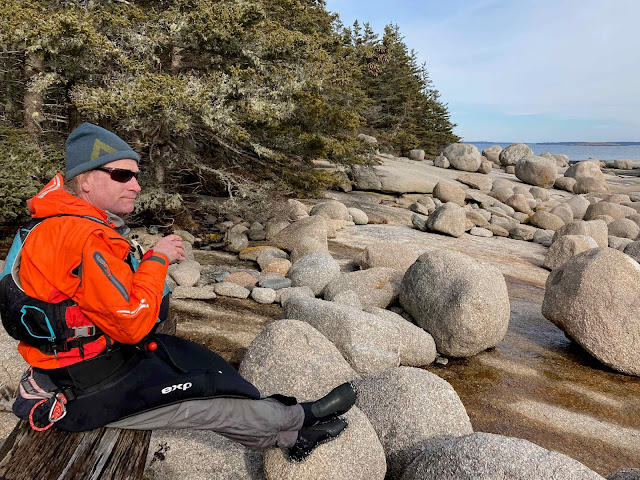 We then walked out among the boulders. I can’t think of any other spots with such a concentration of them, like the glacier just tired of artfully placing them here and there on sloping granite shores and said “ah hell, just drop ‘em all here.” Walking among them feels like strolling through a natural sculpture garden. 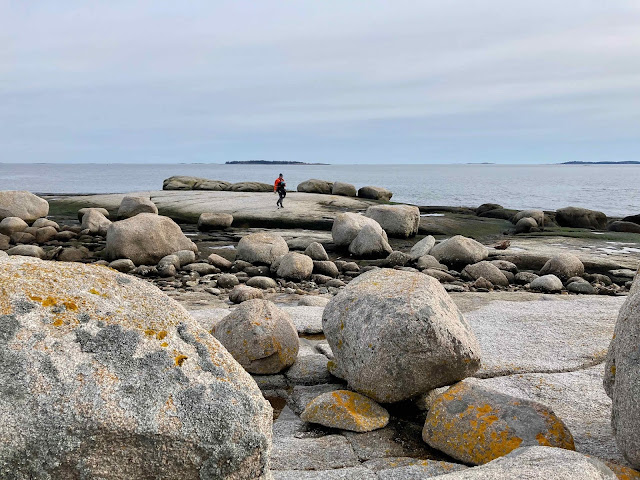 Gooseberry Island is one of the many names that pops into my head when someone asks me about a favorite place out in the archipelago. It’s been a favorite for a long time, even back when it was privately owned and we’d heard that Maine Coast Heritage Trust would acquire it. We like the island’s small size, the boulder field, the way it feels like the last stop at the edge of the archipelago, with Jericho Bay and Isle au Haut for a backyard and the vast Atlantic stretching out beyond. It’s only about 3 ½ miles from the launch, a good distance for a casual paddle, just far enough away from the busier islands near town, and yet angled away from the archipelago, so it feels more remote. 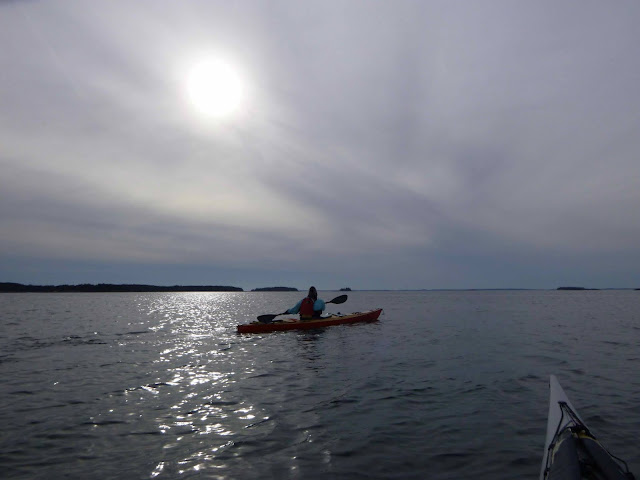 We started feeling a little chilled and launched again. I made my inevitable joke about skipping the swim at Green Island, and when we returned to the launch we were surprised how late it was; the days were getting longer.

Posted by Michael Daugherty at 1:33 PM

We enjoy cruising downeast, especially the fabulous Merchant Row, but do it from our 24' cabin launch out of Boothbay Harbor. We noticed Gooseberry for the first time last summer and wanted to land bu there was a group of kayakers there already so didn't want to intrude. I wondered if you've ever stopped at Scraggy I. on the western end or ventured into and ashore at the southwest cove on Merchant. They both look so appealing. (We're members of MITA and Maine Coast heritage Trust and suppose those islands to be private.) Thx.

Hi DT, thanks for reading. I think you should feel OK about going ashore even if kayakers are there. It's not something I know how to convey easily when I see someone on the water and I'm occupying a coveted spot, but public islands like Gooseberry are for everyone, and certainly big enough to accommodate multiple groups, and no one should expect to have it to themselves. Kayakers in particular should understand- sometimes we're counting on being able to land, especially if we have guests with limited ability to paddle for long periods. And I've met nice people this way. I've also been given the cold shoulder by others on shore when I was the one landing. Which is really weird. One doesn't own it because they got there first. Even when I'm camping I understand that I might need to share with others, and I feel bad if I see someone consider stopping and then keep going.

Both Scraggy and Merchant are private and I don't go ashore on them. Scraggy is essentially a wildlife preserve... it is quite nice, but I like landing on nearby Mark Island when seas allow. Merchant has homes on it and at times, a caretaker who has asked people to go elsewhere. But nearby Harbor, Bills, Nathan, Pell, Wheat are all excellent places to visit and all public.