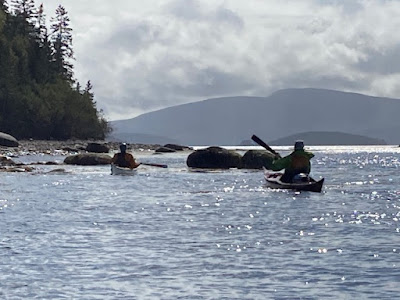 Last week we temporarily closed shop here in Stonington to coach at the Schoodic Sea Kayak Retreat. The five-day event gives paddlers of all levels the opportunity to paddle and play in a variety of locations with different coaches each day. Home base is The Schoodic Institute, a former Navy facility in Acadia National Park, near the end of Schoodic Point. There’s apartment accommodations and 3 meals a day at the dining hall… a bit like a summer camp for grownups bent on sea kayaking. 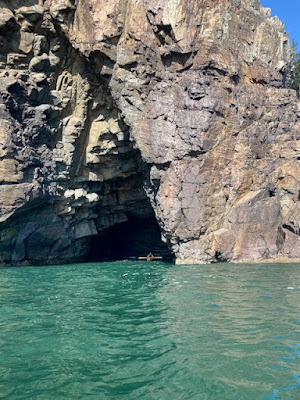 The event is organized by Gerry Polinsky of Sea Sherpa Kayak and Nick Schade, designer and builder of Guillemot Kayaks. Paddlers choose a “pod” depending upon their skills and desires, and that pod goes to a different paddling venue each day, with different combinations of coaches. The. participants come from all over, with a sizeable contingent of those paddling self-built kayaks, and a higher than usual share of those paddling with Greenland sticks. And though there is an instructional element, there’s no curriculum, much the way we teach or coach here at Sea Kayak Stonington. 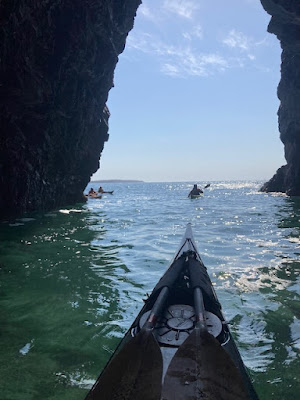 Aside from sampling the stunning neighborhood paddling venues, among them Bois Bubert, Ironbound Island, Sullivan Falls and of course the craggy shoreline of Schoodic Point itself, paddlers were also there to connect with other paddlers, to try out a few boats and get a few tips to improve their paddling. 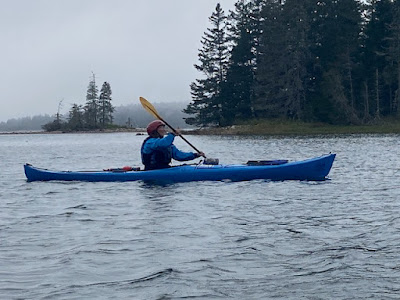 For us it was a change of pace from the summer we’d been having. It wasn’t exactly a vacation, but we appreciated the excellent meals in the dining hall and the relaxed atmosphere – at least a bit less non-stop than the pace we’d been keeping all summer. We liked paddling those locales that we don’t get to regularly from Stonington, and it was satisfying to coach a few people intent on expanding their skills and comfort zones. We could easily observe significant improvements over the 5 days on the water. 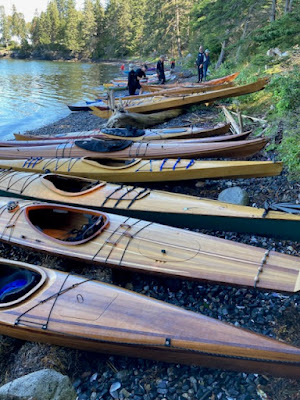 Among the highlights was the boat swap, in which we tried out a few different kayaks, including some self-built models. We both loved paddling the Guillemot Petrel Play, which is available in kit form from Chesapeake Light Craft, as well as the composite version built by Joey Schott at Turning Point Boatworks. I had imagined it as mostly a play boat, akin to the P&H Delphins we often paddle, but was surprised how well it performed when you’re more focused on covering a few miles. The kayak has a 13.15-foot waterline for its 14' length. As the name suggests, it is indeed a nimble play boat, whether you’re catching a standing wave at Sullivan Falls or taking a tight turn through the rocks beneath Ironbound Island’s cliffs. I put it through a number of turns, forward, backward… upside-down, and it did just want I wanted – one of those “magic” boats that immediately makes you feel like a better paddler. 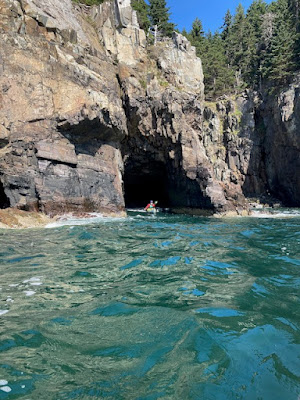 There were off-water events as well. We gave an evening talk about our 2017 Maine coast trip. I set the timer and we just chatted about it, which seemed get the story across without putting anyone to sleep. Dan Carr of the Maine Island Trail Association followed it with some info about the Trail. We were asked thoughtful questions and there were even a couple of positive testimonials about AMC’s Best Sea Kayaking in New England. I rarely hear such feedback or get much recognition beyond getting relegated the realm of “kayaking freaks,” so it was satisfying to bask in the scene for a bit. We even got a T-shirt. 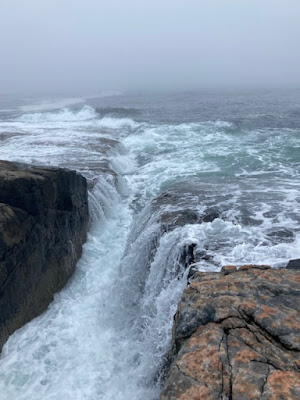 Posted by Michael Daugherty at 8:37 AM