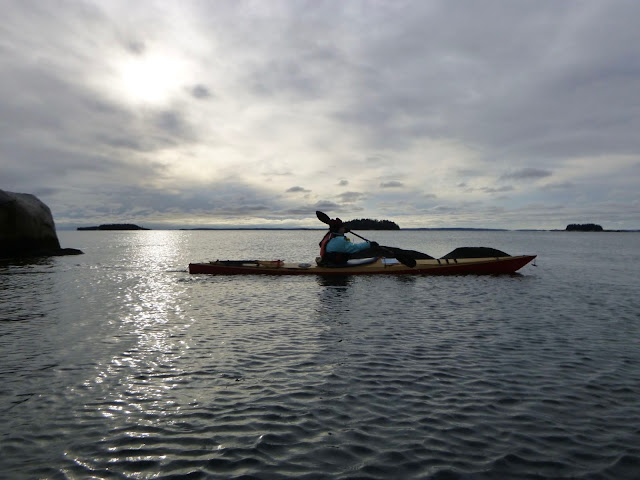 Our winter excursions tend to be a bit less ambitious than in warmer months, so if we launch from town, we find ourselves at the usual places fairly often. Nothing wrong with that, but I couldn’t remember the last time I’d paddled out the Deer Isle Thorofare and, instead of going left or straight, taken a right turn.

With all the attention given to the islands between Stonington and Isle au Haut, some nearby neighborhoods are often overlooked, like the southwest corner of Deer isle with its trio of small uninhabited islands just offshore. It really does feel a bit like a watery neighborhood, bounded on the north by Fifield Point, which stretches slightly southwest toward The Fort and Second Island and more distant Andrews Island. The stretch of residential shoreline between Fifield Point, Sand Beach and Moose Island makes up the other side – about a mile-and-a-half of bulbous, glacially smoothed granite with a few pocket beaches and a bunch of (mostly) modest summer cabins. 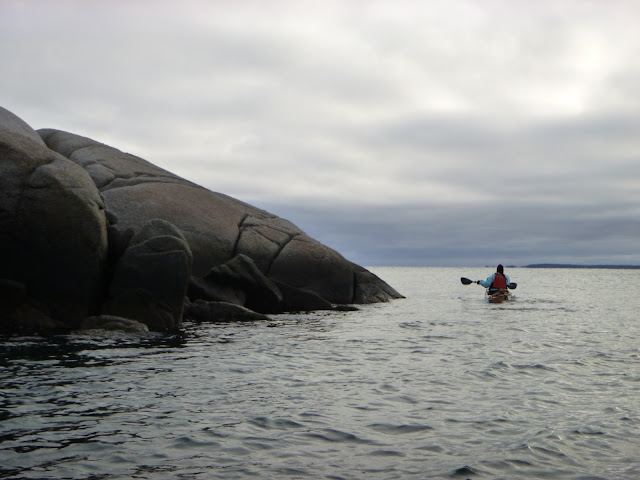 Rebecca and I met Todd down at the ramp just after lunch and headed out just as the tide was cresting. The clouds were thick and gauzy, with the sun occasionally shining through. Temperatures hovered around freezing; we were comfortable as long as we kept moving. 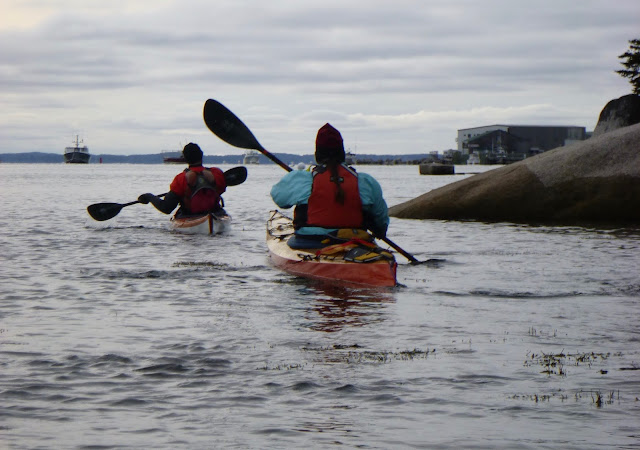 We went past the boatyard and followed the shore of Moose Island, past the newer, large homes with corresponding ‘PRIVATE ESTATE’ signs posted over the beaches. With the tide so high, there were plenty of shoreside rocks to weave among, and a very slight swell rolling in, and as often happens in such conditions, we started focusing less on any destination and more upon the feeling of maneuvering through these passages. 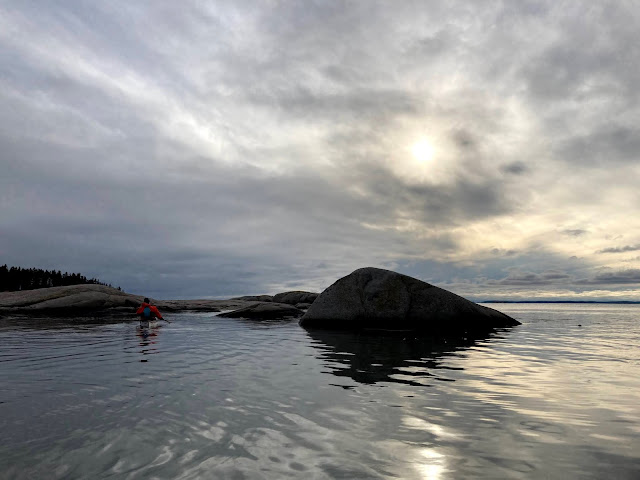 The sun was already low, dimmed by clouds, casting the boulders in  a flat, wintery light. We paused and remarked that none of us had harbored high expectations for this developed shoreline. Perhaps in the summer, with more people around it would feel busier, and certainly at a lower tide we would be more limited in our options, but at high tide on a winter’s day, when many of the summer cottages had boards over their windows, surprise, surprise: it was pretty nice to be there. 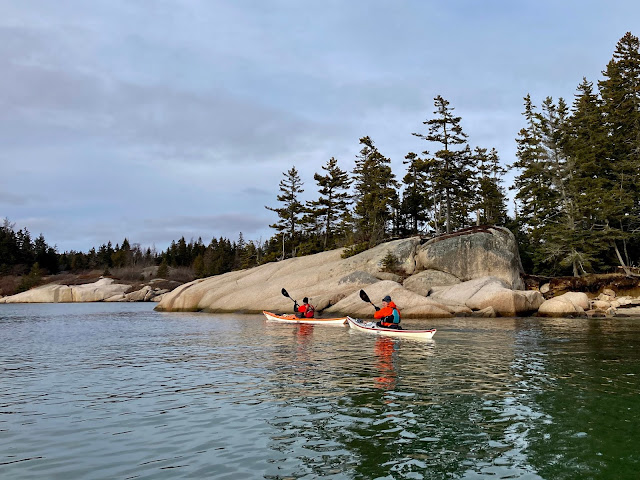 Sand Beach, which is essentially a town park and a go-to spot for those wanting to get out for a bit of fresh, salty air, or perhaps a sunset over the Camden Hills, was empty. We followed the shore and finally spotted a distant couple walking the shore, pointing binoculars out toward the water.

At Fifield Point we headed across to The Fort, a 2 or 3-acre island with a prominent rocky bluff rising above many of the trees. The island is only a couple-hundred yards from the point, but we began to feel the northeast breeze as we pulled away from shore – the wind from the northeast was part of our logic in choosing this mostly sheltered route – and we felt quickly chilled as soon as we landed. It would need to be a quick stop. Maine Coast Heritage Trust owns the island, named, apparently, as a reference to a time in the past when it was a popular duck hunting spot, and often resounded with gunfire. A trail leads up to the high point atop a granite promontory with broad views of East Penobscot Bay. It’s a big view for so little effort. Across the bay, the Camden Hills were spotted with snow. Nearby, in the shallows leading toward Second Island, seals were piled upon a ledge. 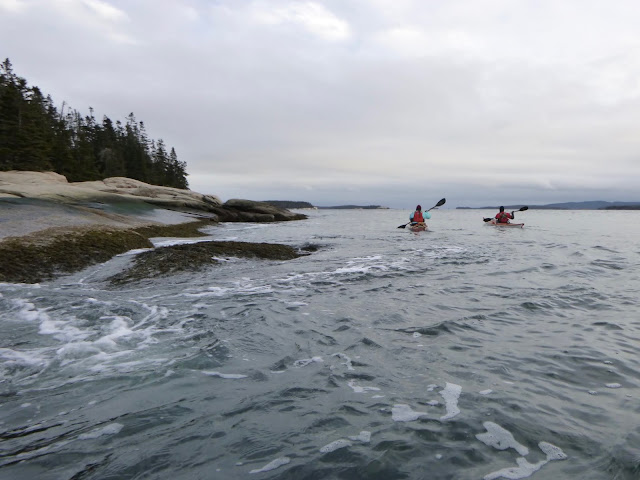 I’d be lying if I denied repeating our usual winter mantra: this would be really nice in the summer. It’s fine out there in winter, and certainly better than not paddling, but right now it sounds pretty idyllic to spend a little more time hanging out without getting cold. We paddled around Second Island and over to Andrews, also owned by Maine Coast Heritage Trust and would have loved to have landed there and taken a walk around, but we were a little chilled and sunset was nigh. We paddled back to Moose Island and retraced our path back up the Thorofare, arriving at the ramp a little after sunset.

The Fort and Andrews Island are owned by Maine Coast Heritage Trust and open to day use.

State-owned Weir Island, just off Sand Beach is on the Maine Island Trail and has a campsite.

Sand Beach is private land designated as a town park. In recent years it has suffered from a dramatic increase in visitation. The recently expanded parking area continues to become overrun, resulting in sloppy parking along the road. This past summer there were complaints, echoed in a newspaper story, about boaters parking trailers  that take multiple spaces.

Posted by Michael Daugherty at 7:22 PM

Second Island is privately owned, not open to the public. It is protected by easement.

Thanks- accidentally wrote "Second" instead of "Andrews" in the notes, now corrected.

The kayak with the red hull looks like a Coho, my first build was a Coho in 2000. I still use it while in Maine.

Hi Ted, thanks for reading. Yes, it is a Coho. My wife Rebecca built it one winter in our gallery space - when we had a gallery in Stonington. It was her first sea kayak and still a favorite:
http://rebeccadaugherty.blogspot.com/2007/04/building-kayak-in-art-gallery.html